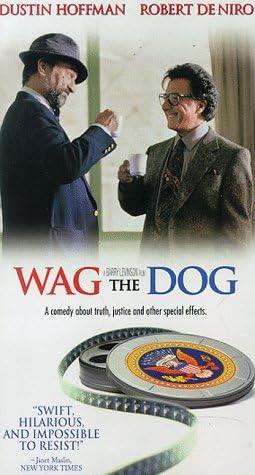 Members & guests–$2.99 streaming rental on Amazon Prime and other platforms. Registered attendees will receive details to join the discussion via Zoom. To RSVP, please scroll down.

Watch the film any time before the discussion–or enjoy the discussion and be persuaded to view it after! Two weeks prior to reelection, the United States president lands in the middle of a sex scandal. In need of outside help to quell the situation, presidential adviser Winifred Ames (Anne Heche) enlists the expertise of spin doctor Conrad Brean (Robert De Niro), who decides a distraction is the best course of action. Brean approaches Hollywood producer Stanley Motss (Dustin Hoffman) to help him fabricate a war in Albania — and once underway, the duo has the media entirely focused on the war. Directed by Barry Levinson with a screenplay by David Mamet and Hilary Henkin, the New York Times called it, “Hilarious and frighteningly plausible.” Join a group discussion led by Village member Mel Washburn via Zoom at 3:00 PM.

+ Google Calendar+ iCal Export
Tickets are not available as this event has passed.